The biennial circuit was dealt a blow by the pandemic, which made it nearly impossible to mount enormous editions of recurring showings of contemporary art amid restrictions of all kinds. But art lovers in the U.S. can take pleasure this month in the return of three such notable exhibitions: the Prospect New Orleans triennial in Louisiana, the Greater New York quinquennial at MoMA PS1, and, now, the New Museum Triennial, which opens in New York this Thursday.

Organized by New Museum curator Margot Norton and Institute of Contemporary Art Los Angeles senior curator Jamillah James, the show is focused on forms of resistance—an apt theme during these trying times. Don’t come expecting to see art meditating on lockdown, the Black Lives Matter protests of last summer, or debates over recent conflicts, however. The sleek art on view here may obliquely allude to pressing issues associated with race, gender, and sexuality, and it may even broach painful histories of colonialism in the process, but these works are rarely upfront about their concerns. In this refreshing exhibition, the artists included largely opt for a sleek aesthetic in which politics are embedded rather than exposed.

Painting is (mostly) out, and a piquantly odd kind of sculpture is in. Surrealism is born anew in works making use of ready-made everyday objects, and industrial materials often share space with natural ones. Science-fictional futures exist in the present, and fine-art and craft techniques are made indivisible. There’s a lot going on in the minds of the 40 artists with work on view, some of whom are getting their first showcases in New York, but rarely ever can it be said that their art feels anything less than highly composed. Norton and James’s exhibition meets the chaos of the moment with stoicism and serenity.

Below, a look at eight standout artists in their show. 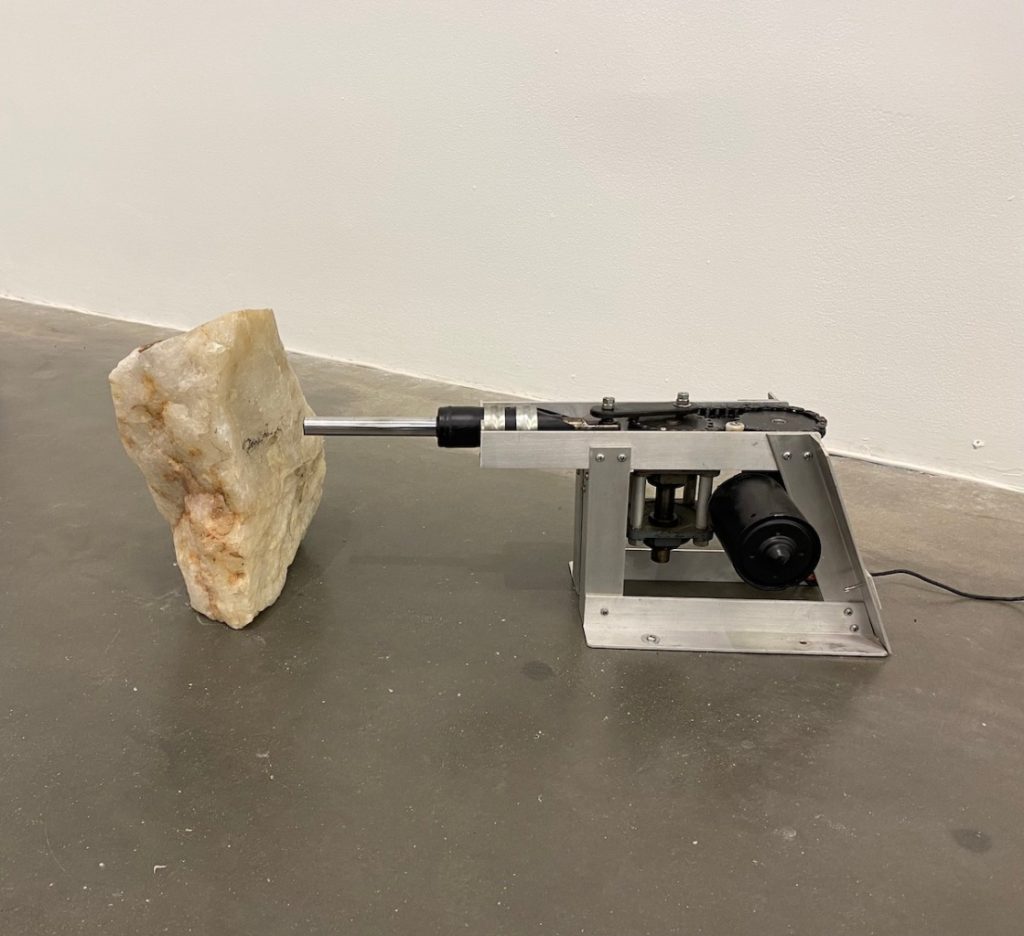 In a show that goes heavy on large sculpture, a tiny work made of just an engine, a stone, and some aluminum proves strangely exciting. That sculpture by Gabriela Mureb, titled Machine #4: stone (ground), 2017, contains a seemingly simple premise—a stone being repeatedly prodded by a mechanical rod—that speaks well to the curators’ interest in perseverance. The work draws its inspiration from a Brazilian proverb—“Soft water on hard stone, hits until it bores a hole”—that also lends this triennial its title. Watch as the stone is poked over and over again by this machine, and notice how this slab tips over a little and then sets itself right back in place. Mureb has crafted a powerful metaphor for resistance in the face of forces beyond our control.

Throughout this exhibition, artists take up everyday detritus and lend it new meaning. To make Untitled (Still Not Over You), 2021, Iris Touliatou visited disused offices in Athens, where she is based, and took from them lighting fixtures that just barely work. She has rearranged these bulbs into two squarish forms that from afar resemble Minimalist sculptures. Up close, the work’s chilly facade falls away. Periodically, the bulbs’ filaments glow, and the work sparks to life. Then it falls silent once more and resumes its quiet rest. Touliatou’s lights will at some point stop working for good, perhaps even during the show’s run. Until then, viewers can watch as the sculpture comes slowly closer to dying out.

Photography—at least in the traditional sense—is nearly absent at the New Museum Triennial, though it does show up in sculptures by artists like Laurie Kang, whose Great Shuttle (2020–21) is among the largest works in this exhibition. Kang works in a tradition of artists creating cameraless photography, which often results in abstractions. In Great Shuttle, large unfixed sheets of film dangle from a structure composed of industrial materials; they’ll develop over the course of the show’s run, and produce new images in the process. Alongside these sheets, Kang has strewn her installation with flex track (a steel framing product more often used when building metal and wood structures), steel studs, lotus roots, casts of anchovies, and cabbage and perilla leaves. In putting all these unlike materials together, Kang elegantly collapses the boundary between organic and inorganic, and shows that photography—a medium which theorist Roland Barthes once compared to death—is very much alive.

Hot off winning Germany’s top art award for young artists, Sandra Mujinga is showing Pervasive Light (2021), a video installation featuring a cloaked Black figure whose image is blurred, glitched, and darkened. Getting a fix on this mysterious figure proves a difficult task, however. Mujinga’s writhing subject moves in and out of focus, and often remains only briefly visible before receding into a void. Set to a thumping bass line, this video is otherworldly—an effect enhanced by its three-screen presentation, which recalls religious triptychs that demand veneration. Mujinga has spoken of previous works as being about “maneuvering through the dark,” or exploring Blackness by refusing to be seen. Existing at the edge of vision’s limits, the subject of Pervasive Light denies us easy answers.

This edition of the New Museum Triennial includes just a handful of paintings, and that makes Ambera Wellmann’s 30-foot-long Strobe (2021) all the more striking. In this gigantic work, a range of figures populate an abstract landscape rendered on a scale more commonly associated with history paintings by Jacques-Louis David and the like. The people are of varying sizes and colors: some appear to exist at the scale of buildings, while others are tinier and more naturalistically rendered. In a manner redolent of Cecily Brown’s brushy canvases, Wellmann offers up clusters of people of ambiguous genders whose bodies press into one another, hinting at an orgiastic celebration at which barking dogs and flying geese are also in attendance.

The ghosts of the past are alive and well in Amy Lien and Enzo Camacho’s waves move bile (2020), a set of hanging sculptures of women’s heads with assemblages resembling organs beneath them. Those heads are based on a statue by Louis Botinelly in Marseilles in which France’s Asian colonies are allegorized as a reclining nude. (Waves move bile was first shown at the 2020 edition of the roving European biennial Manifesta, which took place in the French city that year.) In Lien and Camacho’s hands, that passive figure is turned active. With a vampiric creature from Southeast Asian folklore in mind, Lien and Camacho have turned this woman into a partially formed phantom lit from within whose fleshless body is repeated five times over. Set inside a darkened gallery, these female figures meet their viewers’ gaze, as if ready for battle. 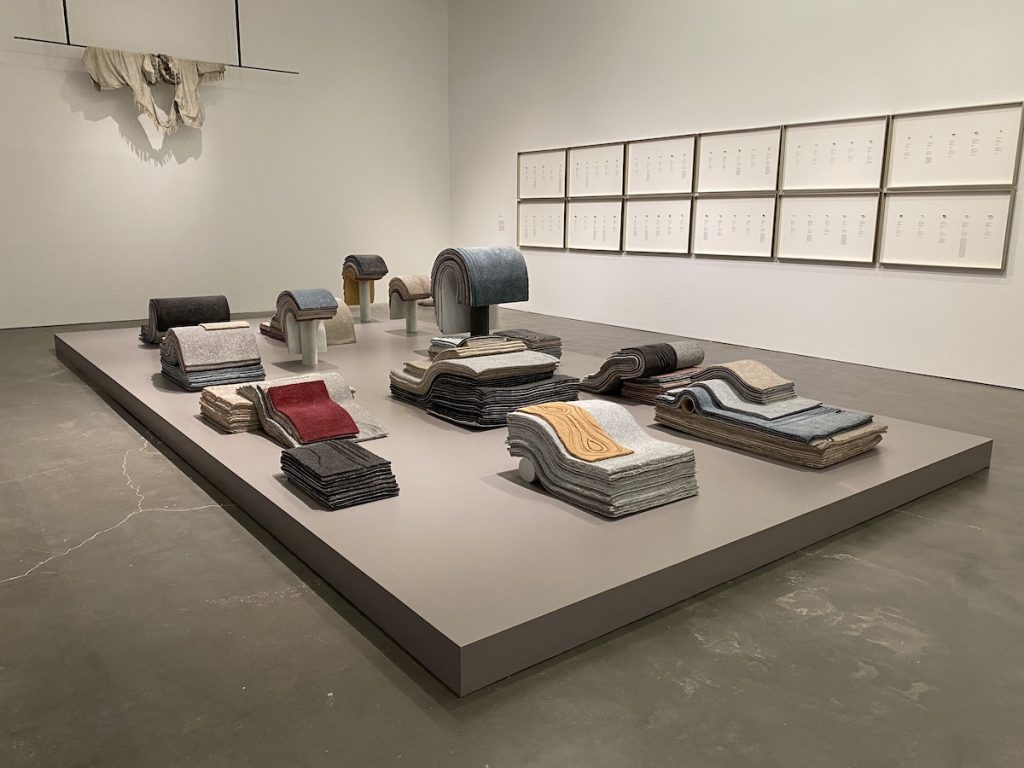 Hera Büyüktaşçıyan, Nothing Further Beyond, 2021.

In a 2020 interview with the website border_less, Hera Büyüktaşçıyan once referred to carpeting as something which “serves as a border and separator between us and the coldness of the earth.” No surprise, then, that she has grown interested in what lies beneath our feet—in particular the layers of history encased deep in the ground. For her installation Nothing Further Beyond (2021), Büyüktaşçıyan offers up cleanly sliced pieces of carpet layered atop one another. Some appear to bend ever so slightly; others are lightly singed with clean lines. Büyüktaşçıyan’s point of inquiry for this work was the ruins of the Arch of Theodosius in her home city of Istanbul. For ancient Romans, the arch would have been seen as a reference to the mythical Pillars of Hercules, which marked the borders of Western civilization and were emblazoned with the Latin for “Nothing Further Beyond.” Consider Büyüktaşçıyan’s displaced carpets as a means to suggest that borders such as that one are merely fictional. 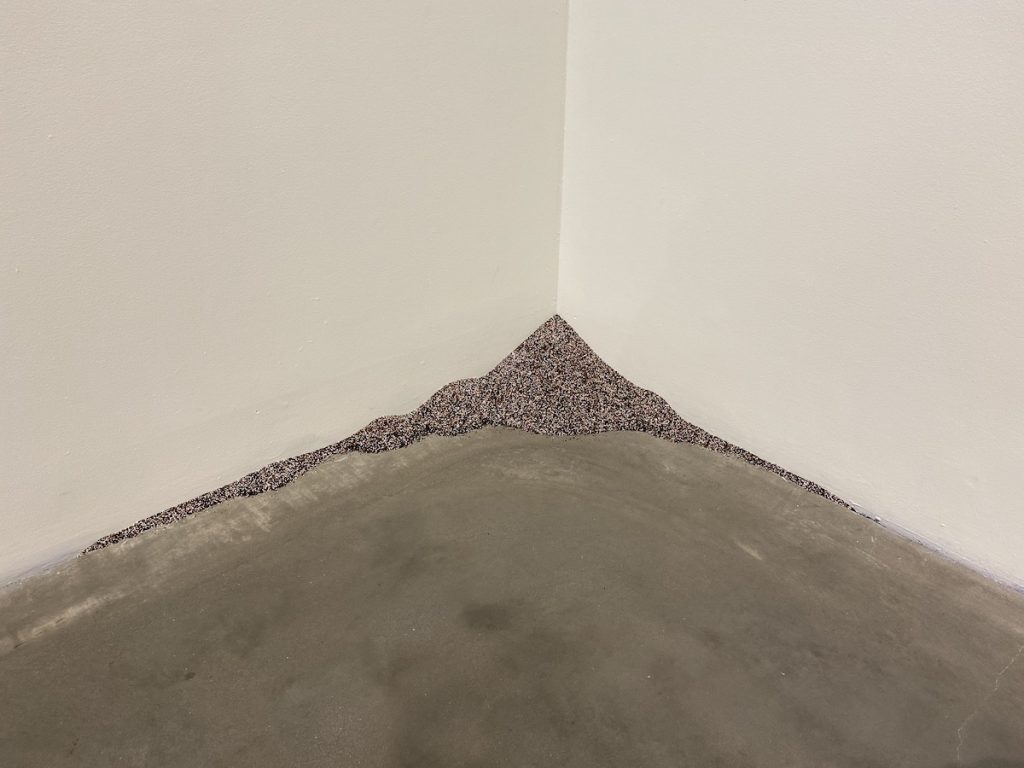 Jeneen Frei Njootli, Fighting for the title to not be pending, 2020.

Rather than installing their work entirely in one place, as is the norm for artists participating in biennial-style shows, Jeneen Frei Njootli (Vuntut Gwitchin) has spread their piles of beads throughout the New Museum, often in nooks and crannies that are more typically occupied by circuitry and wiring. These mounds are all part of a work named Fighting for the title to not be pending (2020). The ones situated in corners beg comparisons to Felix Gonzalez-Torres’s candy sculptures, though unlike those works, whose sweets are open for the taking, Frei Njootli’s piece is meant to remain intact. Still, in the spirit of Gonzalez-Torres’s works, Fighting for the title to not be pending is fragile—one misstep could send small glass pieces in shades of gold, black, and crimson skittering across gallery floors. With pieces such as this one, Frei Njootli draws attention to the difficulty—and necessity—of holding down a space and calling it your own.