Then aspires to convey the charm and grace of old Vietnamese women in the Ao Dai Collection “THIẾU NỮ TRONG TRANH”, as part of her mission to integrate the beauty of the past with the rhythm of modern culture. Artist Le Thuy – founder of the sustainable fashion company Then Design – displays her voice in each traditional ao dai design system, much as she found inspiration in the works of painter Mai Trung Thu’s Young Women. 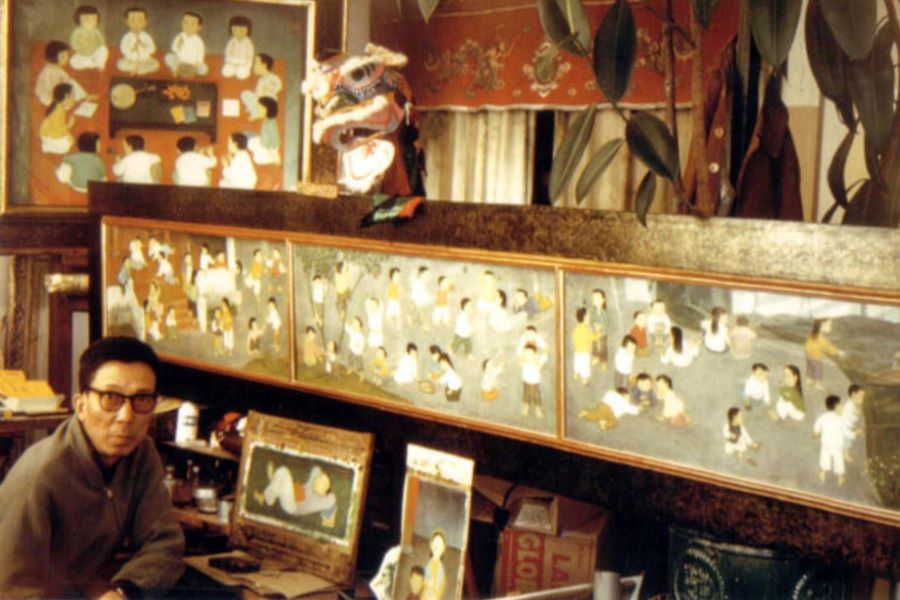 Since the late nineteenth century, the convergence and integration of the two notions of East-West art has broadened artists’ viewpoints, eventually forming their own style and voice in Vietnamese art. The establishment of the Fine Arts College of Indochina ushered in a new era of art, attracting painters to pursue a new route of expression, free of the constraints of European rational aesthetic standards. The techniques and writing styles of the avant-garde painters were partly influenced by the aesthetics of the Fine Arts College of Indochina, but they conveyed their own individual subtleties through delicacy in technique and use of form. Finding new materials in creative creation, such as oil paints, ‘sơn ta’ or ‘sơn sống’ (the latex), and lacquer, has been a tremendous success for modern Vietnamese painters. Furthermore, the appearance of paintings on silk has altered people’s perceptions of this innovative artistic medium. The hand-woven industry grew in Nam Dinh during the first decade of the twentieth century, thanks to the supply of French silk to tens of thousands of looms. La Khe village (Ha Dong), a well-known silk weaving center in Tonkin, has 500 to 600 looms and roughly 1000 to 1200 laborers. Artists have been able to master soft silk since the early 1930s, creating a harmonious beauty with delicate color combinations and depiction processes that the block is only a denotative depiction. 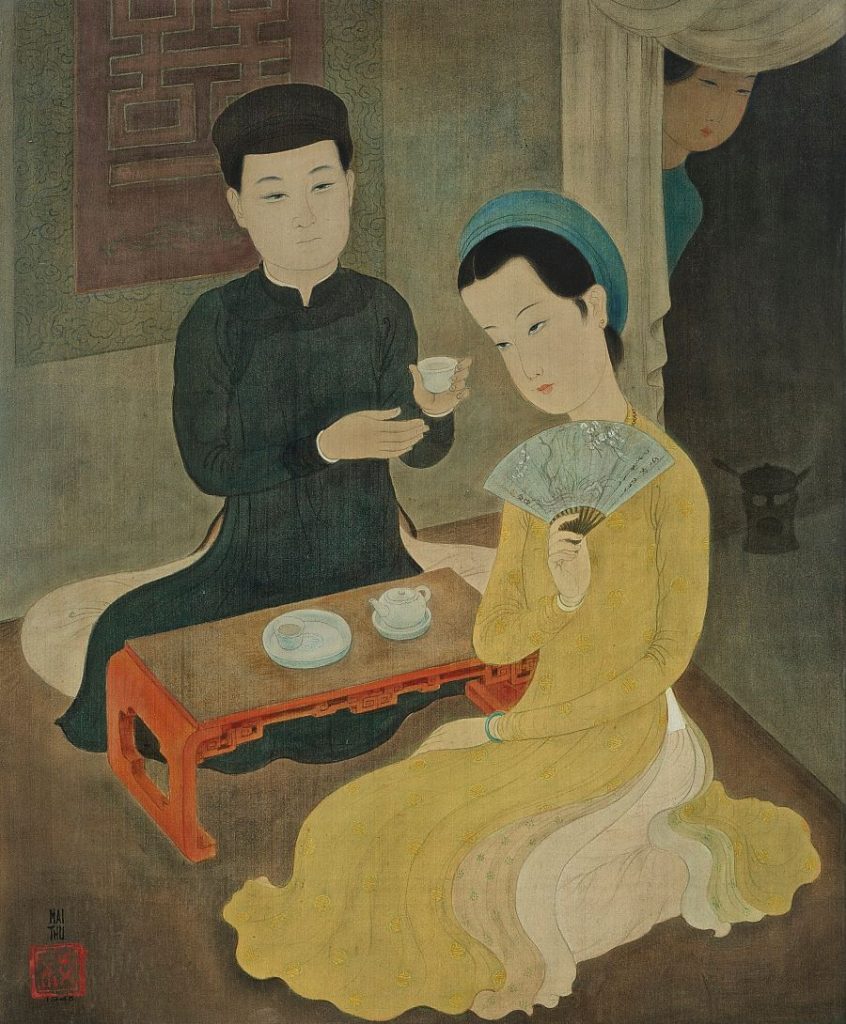 Mai Trung Thu is regarded as a significant painter who contributed to the color richness of current Vietnamese silk paintings by transferring the shimmering and whimsical hues of Impressionism to silk while avoiding the aesthetic rationality of the movement. When it comes to silk paintings on ladies, the amazing talent of painter Mai Trung Thu must be mentioned. Mai Trung Thu came from a mandarin family and was born in 1906 in Do Nha village (Ro Nha), An Duong district, Kien An province (former) now Tan Tien commune, An Duong district, Hai Phong. Mai Trung Thu, a graduate of the Fine Arts College of Indochina’s inaugural class in 1925, made a significant contribution to Vietnamese painting with masterpieces filled with Asian culture. He adopts a personal painting approach during the composition process, in which he conquers the delicate silk and completely exploits the powerful colors to achieve the impression of delineating the light and dark sections for his works. Because of that, his paintings seem to evoke a space of nostalgia for the past. Exploring and experiencing many different compositions, Mai Trung Thu’s name seems to be best known for his classic silk paintings. 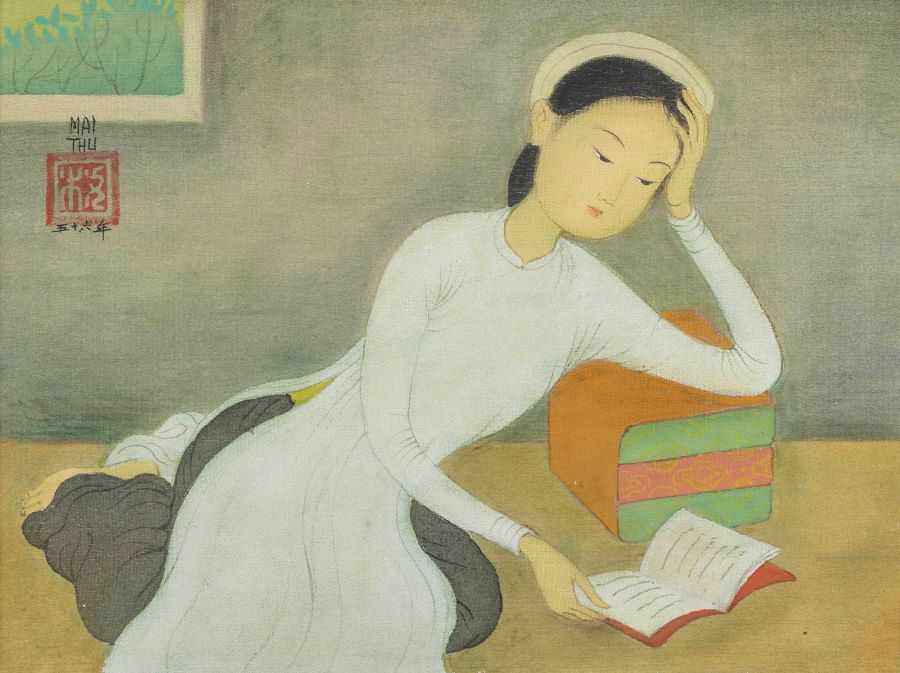 Most of his silk paintings depict Vietnamese people and landscapes – mainly women – posing with leisurely gestures. The subject’s exquisite facial expressions, evocative posture, and vibrant interaction give a romantic and poetic glimpse at Vietnamese people’s daily lives. For the painters, the Vietnamese woman is an eternal source of inspiration. When a woman’s silhouette appears in a photograph, her beauty can be a convention. There are painters who captivate viewers by the graceful and elegant appearance of beautiful women, other painters succeed in the eyes. Mai Trung Thu has created his own identity, different from To Ngoc Van and Tran Binh Loc – painters who loved to depict elegant women in Hanoi in the 1930s. The painting depicting a young woman in Mai Trung Thu’s eyes shows the beauty of femininity, grace and decency with a slim and ethereal silhouette, especially the eyes. His paintings’ eyes are compared to the windows of a sentimental, melancholy soul, evoking a melancholic affection. Mai Trung Thu was influenced by the Neoclassical school and dedicated his life to painting young women with simple, non-religious drawings that expressed a light, soft, romantic and fragile soul. Mai Trung Thu is one of the four classics of Vietnamese painting, Pho – Thu – Luu – Dam (Le Pho – Mai Trung Thu – Vu Cao Dam – Le Thi Luu), depicting a young Vietnamese woman. By combining innovative touches of modern Western painting techniques with the image of a young Vietnamese woman, he left many memories and emotions indescribable through each of his paintings of young women. 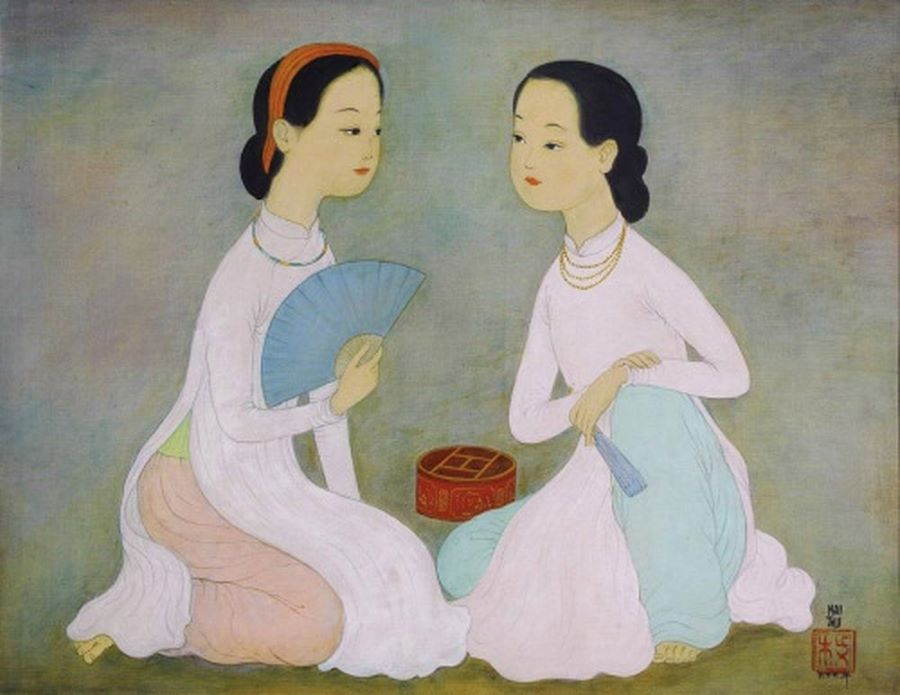 Reminiscent of the poetic context of Vietnamese life in the mid-twentieth century, the beautiful and elegant figure of an ancient woman seems to be found in the ao dai of contemporary life. Artist Le Thuy conveys her respect for the charm in each gesture, sitting posture when reading books, drinking tea in the graceful ao dai. Meticulously from the selection of materials, dyeing materials, to hand-painted motifs, Then brings to the wearer both the charm of the past and the quintessential modern eco-friendly products. Then is committed to supporting and honoring artists, as well as maintaining and preserving environmental principles. Then meets its aim of giving creative beauty to the wearer and for the wearer as one of the few sustainable fashion brands in Vietnam. The old charm’s silhouette has now been opened to return and beautify the current rhythm of life, putting on ao dai, and suddenly find the lyrical features of the past in the present life. 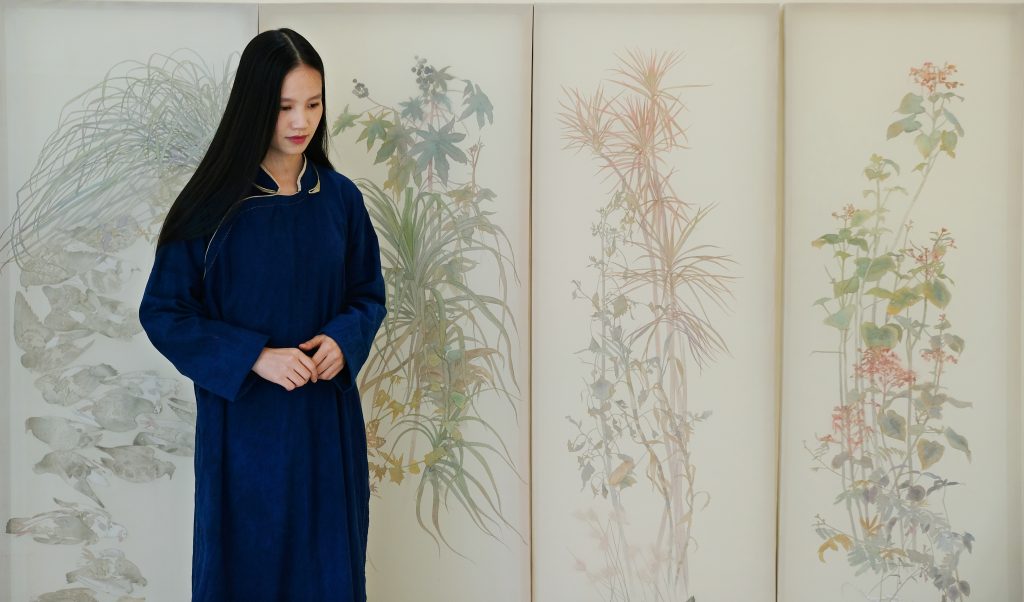 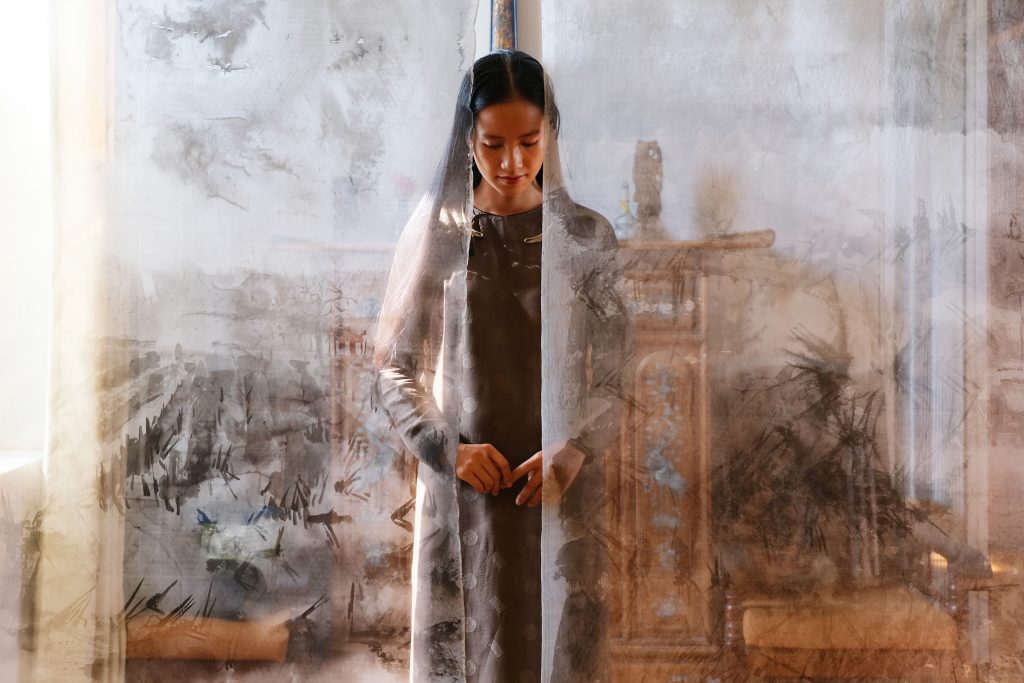 Vy admires Le Thuy’s talent as well as the message of the good, the true and the beautiful that the Ao Dai Collection “THIẾU NỮ TRONG TRANH” aims to represent.  Vy is proud to be Then Design’s only distributor in the South, accompanying on the path to find that meaningful beauty.