In one scene in the 2020 Netflix blockbuster I’m Thinking of Ending Things, the main character, Lucy, pulls out her iPhone and scrolls through images of gauzy, moonlit landscape paintings, mottled just enough to teeter on the edge of abstraction. They’re moody, enveloping, and intimate. They also give a seductive introduction to

Tonalism, a somewhat overlooked precursor to abstraction that emerged in the aftermath of the American Civil War. 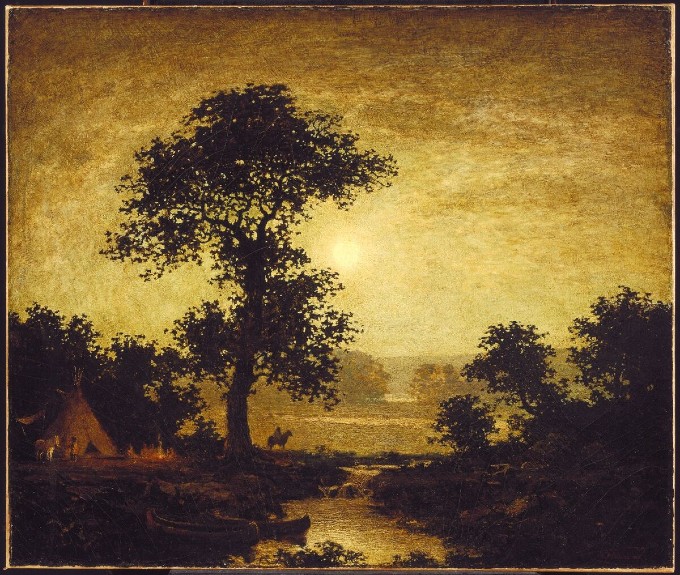 While I’m Thinking of Ending Things only grazes these paintings, it does hint at Tonalism’s essence: the subtle abstraction of landscape to express the mind’s inner workings, offer space for reflection, and serve up an escape from reality. It also draws a provocative line between Tonalism’s 19th-century origins and our own contemporary moment—one full of frenzied minds looking for salves.

“There’s something about [Tonalist work] that’s soothing and takes you away from the frakas. In the case of the Tonalists themselves, that was the post–Civil War environment of reconstruction and industrialization,” explained Karen Quinn, curator of the recent exhibition “Tonalism: Pathway from the Hudson River School to Modern Art” at the New York State Museum. “It’s a response that moves inward—a subjective response—that really suited its time period and ironically suits our time right now, too.” 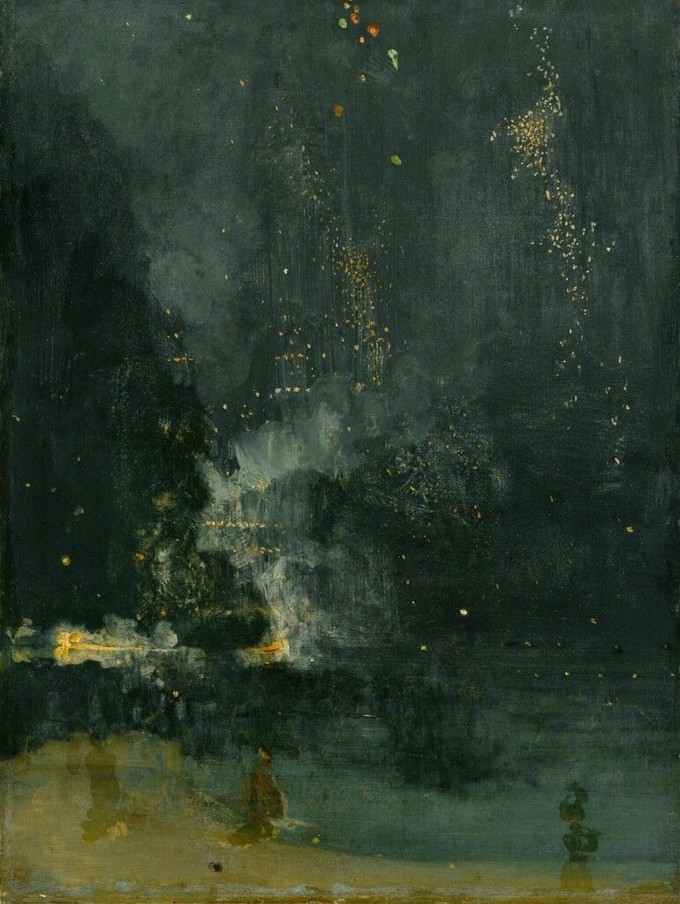 Quinn is one of a growing group of curators and historians reconsidering Tonalism to expand its definition and affirm its influence. Once something of a black sheep to its more chromatically vibrant peer  Impressionism, the movement hasn’t received the same scholarly attention as many of art history’s “isms”—and makes even fewer Hollywood cameos.

Tonalism first surfaced in the heady aftermath of the American Civil War and matured during a period of meteoric transformation in the United States—one that encompassed mass industrialization, urbanization, and immigration. Lasting from around 1880 to 1915, it neatly straddled the turn of the century and, paradoxically, both sparked progress and resisted it.

As historian Joseph C. Murphy has written, “Tonalism was a typically American enterprise, at once conservative and experimental: its craftsmanship was the last stand of American academism, while its subjectivity and abstraction anticipated postimpressionism.”

Or, as Valence put it in Nocturne, “From the twilight of one century to the dawn of another, the night unfolding on the canvas acted as a transitional space.” Tonalism wasn’t a movement in the traditional sense—its artists didn’t rally around a manifesto or even consistently label their work with an overarching term (the word “Tonalism” was only popularized after many of its progenitors were in the ground). 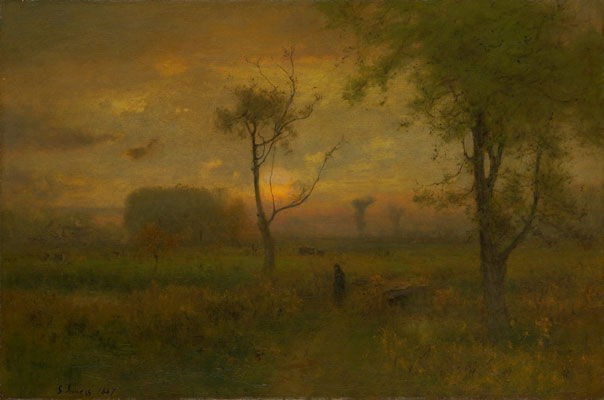 Tonalist artists took cues from a range of transatlantic styles whose commitment to realism was slackening. On trips to Europe, the loose brushwork of Barbizon painters and the mystical undertones of French Symbolism appealed to American artists. But despite being rooted in transcendental yearnings, the style was also deeply connected to its social and political context. While its calming, meditative natural scenes certainly offered an antidote to the trauma of Civil War, they also embodied nostalgia for a bygone world: the formerly “undiscovered” frontier, now overtaken by industry and smog-glutted cities. A flood of hazy, luminous landscapes painted from memory resulted. Generally, they’re veiled in the soft, slippery glow of dawn or dusk and rendered in muted tones: silvery grays, velvety greens, blues, purples, and ambers. Similar colors were situated alongside each other, creating an almost vibratory effect (the term “tonal” as applied to fine art has its roots in the vocabulary of music). Sometimes the scenes are overwhelmingly dark, punctuated by a single, very small source of light—often the moon.

The moody, monochromatic auras that shrouded these canvases helped guide artists—and their viewers—away from the tangible world into an intangible space of emotion and reflection. “The arrangement of colors must be kept in harmony because it must reproduce not merely the facts of the landscape…but rather the effect of the scene upon the painter’s feelings, the emotion it evokes,” Innes explained. At the time, this emphasis on subjectivity and emotion was innovative, and it went on to provide essential trellising for the growth of abstraction.

But despite being rooted in transcendental yearnings, the style was also deeply connected to its social and political context. While its calming, meditative natural scenes certainly offered an antidote to the trauma of Civil War, they also embodied nostalgia for a bygone world: the formerly “undiscovered” frontier, now overtaken by industry and smog-glutted cities. 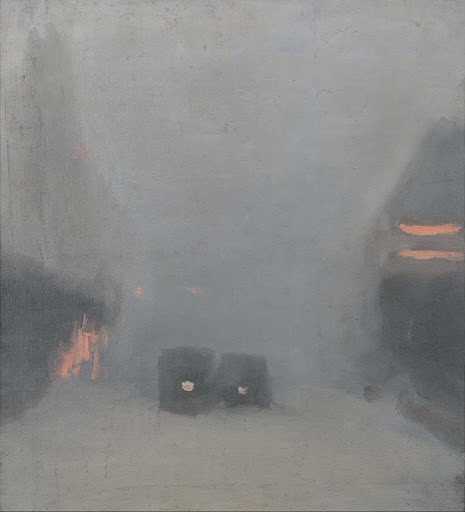 The popularity of Tonalist work reached its peak by 1900, pointing to a widespread longing for untouched landscapes. On one hand, this connected to both the rise of conservation efforts and resistance to increasingly unhealthy, crowded living conditions in urban centers. On another, as Valence points out, it bolstered the tendency to ignore—even erase, as she argues—the genocide of America’s Indigenous population. Some Tonalist painters, like Blakelock, whitewashed this reality by lacing moonlit scenes with Indigenous figures shown at peace and at rest. Today, these pictures can read as an uncomfortable rewriting of history that allowed the predominantly white, turn-of-the-century Tonalist viewership to “heal” without facing the harm they’d caused. 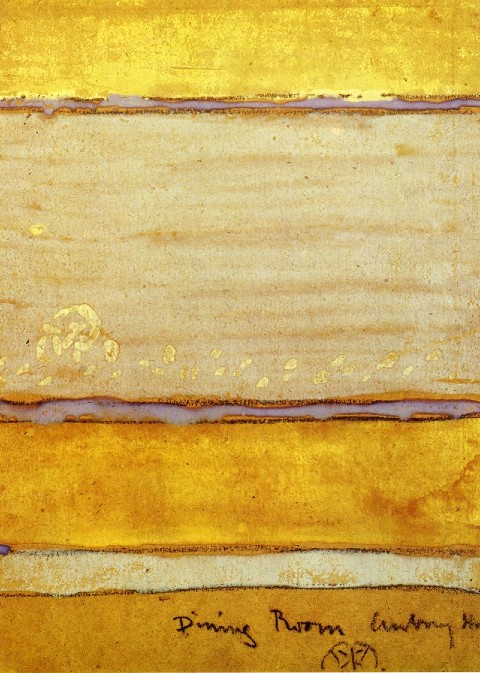 As numerous scholars have pointed out, Tonalism is rife with contradictory motivations and meanings—which isn’t surprising, given its emergence from a society grappling with an identity crisis stoked by war and rapid industrialization. By the time the 1913 Armory Show hit New York, Tonalism had fallen out of vogue in favor of more vibrant, less contemplative, and arguably more straightforward styles like Impressionism. The mood in America had become brighter and less hazy—and so did its artistic preferences. “As the United States entered World War I with a certain optimism,” Valence writes, “the American public’s fascination with the nostalgic visions conveyed by the nocturnes seemed to wane.” As Cleveland put it, “Tonalist canvases became increasingly lumped in with the ‘dark pictures’ of the art trade.”

While Tonalism’s cloudy surfaces and somewhat enigmatic connotations may have propelled it out of favor in the early 1900s, it’s precisely these characteristics that appeal to scholars and viewers today. An art that can feel inscrutable, on one hand, is also ripe for investigation, analysis, and consideration. After all, at their core, Tonalism’s hazy, enveloping scenes were fueled by a desire to calm the turbulent recesses of the mind and—in the process—open it to deep contemplation.